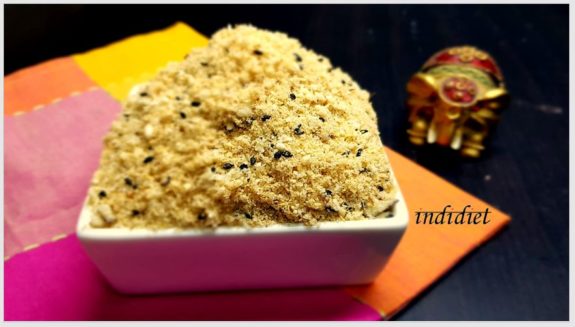 Avalose podi is a traditional Kerala snack which is known in different names like avalosu podi, poorapodi, pooram podi, poora podi, pooram varuthathu, avilose podi…. and then a varient of avalose unda.

Avalose podi traditionally is made by preparing the rice flour by soaking rice flour for about 4 to 5 hours, then draining it and grinding.Here an instant version of the Avalose podi is shown, with the same taste. This will take only about 10 minutes to prepare and can be stored for later use also.

In a bowl, mix all the ingredients except sesame seeds and sugar. Mix well to make the flour moist. Heat a pan and once the pan is hot add the prepared flour mix into it. Then dry roast the mix over low to medium flame. Add the sesame seeds and dry roast for 10 minutes or till golden brown in colour. After that turn off the flame and add the sugar. Adding sugar is optional as you can have it without sugar or even with banana or milk. After cooling down, store it in an airtight container. Healthy and easy avalose podi, the any time snack is ready.

Detailed step by step cooking video of avalose podi given below:

More From This Chef »